Nobody who has lived in Catalonia can ignore the importance of Catalan identity – culture here is a fight for identity.  Being Catalan is not just factual, it is both an aspiration and a struggle – a struggle for identity recognition in the Iberic world.  “Catalonia is not Spain”, is a phrase tagged in the streets, seen at Barcelona football games, and of course during Catalan street protests. 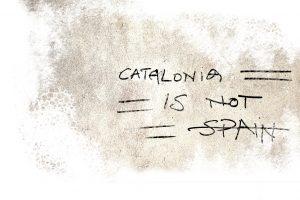 At the core of the Catalan psyche there is a spirit of independence and resistance, going back hundreds of years.  As a small area surrounded by powerful neighbours, Catalonia’s geography condemned it to struggle for its integrity against French and Spanish ambitions.  Integration with Spain made resistance second nature to the Catalans, in a never ending battle to be recognized as a community.  It is hardly surprising that the Anarchist movement became so active in Catalonia.  And during the Spanish civil war, Barcelona became the capital of resistance to the dictatorship.  The ability to resist, resilience, and pride in integrity are dear values to Catalans.

If Catalan culture is a voice of resistance, it is also defined by language.  The Catalan language has been under threat, endangered by attempts to eradicate it as the Spanish tried to integrate Catalonia into the Spanish Kingdom.  How many times have we heard the story of Catalans being denied the right to speak their own language in shops or in public places?  But the language survived, and is a source of immense pride to Catalans.  It is understood and spoken by more than 70% of the Catalonian population, even though it is estimated that only half are of authentic Catalan descent.  For an immigrant – even a Spanish one – learning the language is a condition for integration.

One surprising trait of the Catalan culture is that, for a population that sees itself as under siege, Catalans are actually one of the most inclusive people that one can meet.  Geographically, Catalonia has been a corridor – an access point from Europe to the Iberic Peninsula and beyond, to Africa.  Catalonia has always been a land of passage, and a land of strong immigration.  Even before the industrial revolution and mass immigration from Spain, Catalonia was open to influences from France, Germany and Switzerland.  This tradition has taken root and continues today in the Catalan sense of inclusiveness.  Catalans accept that foreigners can become Catalan, providing, of course, they adapt – in particular, they make the effort to learn the language.  It is also true that, as a land of passage, Catalonia has been the cradle of flourishing trade, and Catalans, although deeply attached to their land and their roots, are also courageous travellers themselves.

In other cultures, the need to resist and fight for existence has bonded people into a tight community; another surprising trait of the Catalan culture is that the Catalan fight for identity has actually developed quite the opposite, a fierce form of individualism.

“Sortir s’en” – find a solution for yourself – is a key vernacular phrase that resonates deeply for Catalans.  Unlike France and Spain, where the central State has shaped the country and society, the dominant feeling of Catalans is that, in the absence of a true Catalan State, it is up to every person to take responsibility for their own destiny.

It is interesting to note that individualism is not seen as being contradictory to a strong aspiration for community:  Catalonia had a traditional rural organization centred around the “masia”, the farm, where extended family members lived and worked together.  In the same masia tradition, family businesses are particularly prosperous in Catalonia, which has one of Europe’s highest percentages of SMEs (small and middle sized businesses), in proportion to the economy.  In a sense, family businesses are a manifestation of the “sortir s’en” philosophy.  Even today, if you are Catalan you are more likely to work in family business than not.  And not surprisingly, the Barça training Academy is called…. La Masia!

The values of entrepreneurship and hard work are of crucial importance in Catalonia.  Catalans say these are characteristics which distinguishe them from the Spanish, and which have led to Catalonia’s economic success.  Although predominantly catholic, Catalans like to define themselves as the “protestants” or the “Germans” of Spain – laying claim to the protestant philosophy that the reward IS the work, not what the work achieves.  And there is something similar to the protestant “election”, a reward for those who dedicate their lives to serious matters and relentless effort.

In Catalan culture, there is an tension between “Seny” and “Rauxa”. “Seny” (common sense) refers to actions that are inspired by reasonable and mindful actions.  Conversely, “Rauxa” is a burst of activity inspired by impulse, instinct.  Nearly all of the conversations I had with Catalans on “Seny” and “Rauxa” noted that, although in classic Catalan culture both were dialectically linked (as the ying and the yang are in Asian cultures), contemporary culture is more inclined to celebrate “Seny”, and consider “Rauxa” with suspicion, suggesting a cultural evolution towards a more mature identity, and perhaps a rejection of instinctive and spontaneous behaviour.  Is this the result of Catalan efforts to define themselves as the “adults” of the Iberic peninsula?  The fascination for Ramon Llul (1232 – 1315) and his “mystic rationalism” may well be a good indication of where Catalonian aspirations lie.

Even though the “Rauxa” is described as a behaviour from the past, it is true that there is a vibrance, an energy, to Catalan society, a creativity borne of impulsion.  The popularity of the “Casteller” (human tower) is symbol of Catalan energy:  taking risks, but planning carefully; reaching higher based on collective work, passion and expressivity; getting together but with a common goal.  Although Catalan individualism does not impede the gregarious aspect of Catalan character, there is a particular flavour to Catalan community – a sense of togetherness born of adversity, of the need to face a common challenge.  Holding hands, as people do when they dance the Sardnana, is emblematic of this sociability.  More than anything, the sense of togetherness manifests solidarity.

And then there is football.  Barça, Catelonia’s beloved team, is more than a football club, it is an institution, and an emotional phenomenon, providing an emotional component to Catalanity.

The team’s history is not one of an ordinary sports club.  During the dictatorship, football games were the only possible manifestation of Catalan feelings, and they became a space of communion and resistance.  Beyond the culture, the language, and the land, Barça is continuing to make Catalans proud, reflected in the excellence of a team widely seen as national heroes.

To be successful in Catalonia, it is not good enough to look at Catalonia as a region of Spain, nor even simply to respect the culture.  The way to find resonance is to get under the skin of the culture, to understand and embrace Catalans’ vision of themselves.